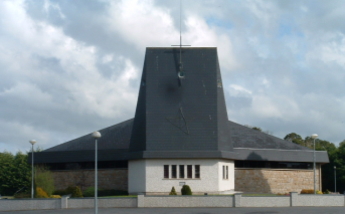 The Episcopal Ordination of Fr Francis Duffy as Bishop of Ardagh & Clonmacnois. 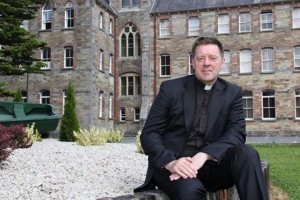 On Sunday 6th October 2013, Bishops of Ireland, Clergy from the Diocese of Kilmore and Ardagh, Classmates from the year 1982 and invited guests filled St. Mary’s Pro-Cathedral in Athlone as Francis Duffy was ordained Bishop of Ardagh and Clonmacnois.

The ordaining prelate was Cardinal Sean Brady, assisted by Archbishop Browne, the Papal Nuncio and by the retired Bishop of Ardagh Bishop Colm O’ Reilly.

He was ordained in 1982. He taught in St. Patrick’s College in Cavan and was appointed teacher and then principal of St. Felim’s Diocesan School in Ballinamore. In February 2008 he was appointed resident priest here in the parish of Laragh, while also working as Diocesan Secretary and Chancellor of the Diocese.

His appointment as Bishop of Ardagh and Clonmacnois was announced on 17th July 2013. 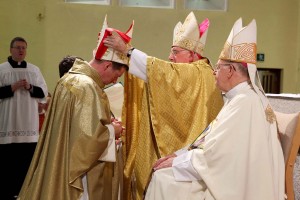 Bishop Francis is given a ring, a mitre and a crozier as symbols of the authority and office
vested in him as Bishop of Ardagh and Clonmacnois

During his address he thanked Archbishop Charles Brown for “imparting the shock of being appointed as Bishop with great gentleness and encouragement!” He thanked Bishop Colm for his warm welcome into the diocese. He went on to say that Bishop Colm is “a much loved pastor of deep faith, strong substance and compassion.”

Present at the ceremony was his mother Mary and his family whom he welcomed. He also greeted his classmates from 1982 and the clergy from his native Kilmore and Ardagh.

He concluded by saying “I am conscious that I need to listen, and to engage with, the people, priests and religious so that together and with God’s help we can continue to build up the ‘People of God’ in Ardagh and Clonmacnois. I look forward with great joy and enthusiasm to joining with you and to working and living among you in our mission of spreading the Good News of Jesus Christ.” 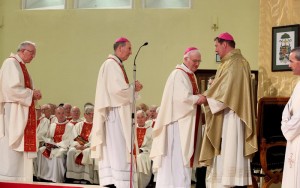 Bishop Francis is greeted by his brother Bishops.